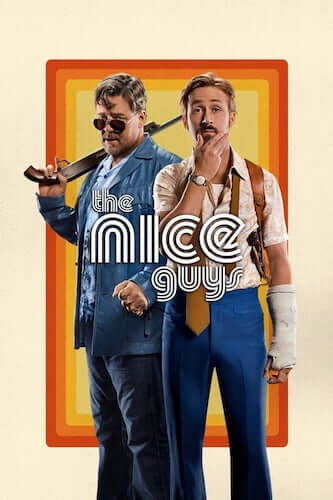 Holland March (Ryan Gosling) is a down-on-his-luck private eye in 1977 Los Angeles. Jackson Healy (Russell Crowe) is a hired enforcer who hurts people for a living. Fate turns them into unlikely partners after a young woman named Amelia (Margaret Qualley) mysteriously disappears. Healy and March soon learn the hard way that some dangerous people are also looking for Amelia. Their investigation takes them to dark places as anyone else who gets involved in the case seems to wind up dead.

Hot on the heels of Iron Man 3, writer/director Shane Black returned to his quotable LA noir wheelhouse with this fun, stylish flashback feature, screening by itself and as part of our Shane Black Christmas double feature with Kiss Kiss Bang Bang.

“Quick on its wits and fast with its fists, this is Black firmly back doing what he does best. And nobody out there does it better.” – Empire Magazine