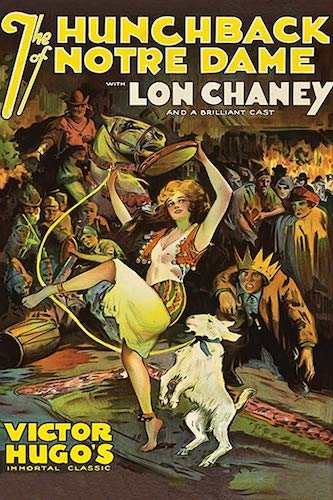 The May Is For Monsters! installment of our monthly Enjoy The Silents classic film series takes a look at a different sort of monster, with an introduction by series curator Kelly Robinson.

“Worth seeing for Chaney’s remarkable performance; even bowed and constricted by the heavy weights he used to help simulate Quasimodo’s crippled gait, his body remains extraordinarily expressive.” – Time Out

In 15th-century Paris, Jehan (Brandon Hurst), the evil brother of the archdeacon, lusts after a Gypsy named Esmeralda (Patsy Ruth Miller) and commands the hunchback Quasimodo (Lon Chaney) to capture her. Military captain Phoebus (Norman Kerry) also loves Esmeralda and rescues her, but the Gypsy is not unsympathetic to Quasimodo’s condition, and an unlikely bond forms between them. After vengeful Jehan frames Esmeralda for the attempted murder of Phoebus, Quasimodo’s feelings are put to the test.