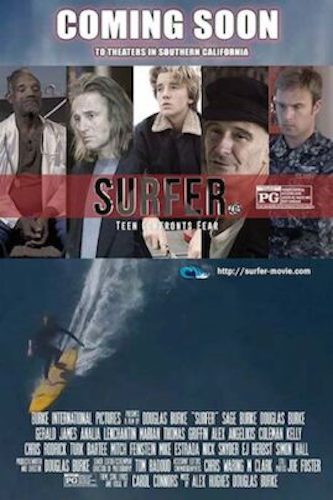 At the age of 13, Sage is crippled by fear after suffering a wipeout on a huge wave. Paralyzed by fear, he no longer surfs the waves. Unable to ignore the pull of the ocean, he finds more than he bargained for while fishing in the surf.

Surfer: Teen Confronts Fear is the kind of gotta-see-it-to-believe-it film that will go on to be mentioned in the same breath as The Room, and Central Cinema is thrilled to return this newly-minted cult item to Knoxville.

“Surfer: Teen Confronts Fear is much like its title: peculiar, earnest, nonsensical, and assembled with little apparent understanding of how things are done. But not once does the movie feel anything but genuine: it’s a treatise on spirituality by someone with undeveloped filmmaking knowledge – and with unresolved baggage regarding the military. Between its endless monologues and nonsensical story, it’s hypnotically weird, sometimes edging on surreality.” – /Film

“Douglas Burke, Surfer’s auteur, has crafted a fascinatingly absurd drama about a boy who must rediscover the courage to surf again with the help of the ghost of his father. His real-life son Sage plays the titular ‘Surfer.’ Burke plays his father, ‘Father of Surfer.’ The movies has overt Christian themes, including multiple oral tellings of Bible stories. It also has a dead whale, some truly incredible green screen, and one of the most uncomfortable portrayals of a mentally incapacitated person ever committed to film.” – VICE