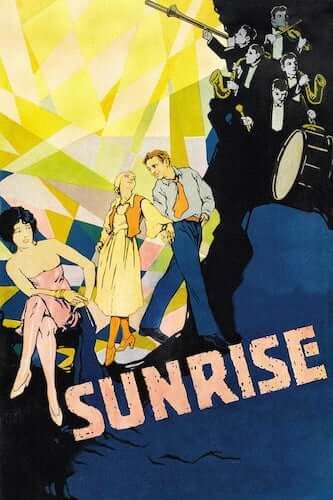 Bored with his wife (Janet Gaynor), their baby and the dull routine of farm life, a farmer (George O’Brien) falls under the spell of a flirtatious city girl (Margaret Livingston) who convinces him to drown his wife so they can escape together. When his wife becomes suspicious of his plan and runs away to the city, the farmer pursues her, slowly regaining her trust as the two rediscover their love for each other in this award-winning silent classic.

Join us for the return of our Film On Film series as Bradley Reeves presents one of his very favorite films on 16mm from his personal collection!

“Rich, strange and gorgeous, F.W. Murnau’s SUNRISE shows what an artist of the late silent era could accomplish cinematically, backed by an open checkbook and fueled by the highest aspirations even in the simplest of morality tales.” – Chicago Tribune