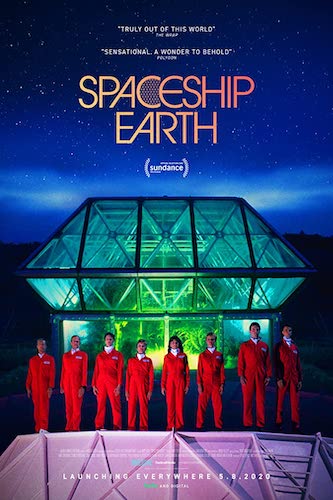 Spaceship Earth is available to stream now courtesy of NEON and Vimeo’s VHX platform; every $3.99 virtual ticket (good for three days) directly benefits Central Cinema when purchased through this link.

Deep in the Arizona desert, there’s an enormous glass terrarium where a miniature replica of earth’s ecosystem lives called Biosphere 2. Its conception began at a countercultural commune, where an innovative group of artists, adventurers, and ecologists, forged an alliance with a Texas oil scion to create Biosphere 2 as a pilot for Mars colonization. They also hoped that their project would be a model for sustainable living on earth—also known as Biosphere 1.

In 1991 their spectacular project became a media sensation, when eight “biospherians” went to live hermetically sealed under the glass dome for two years. However, shortly after their mission began, the biospherians contended with ecological calamities—from food shortages to oxygen deprivation—and quickly the media’s fanfare turned to scorn. Cult accusations surfaced about the project’s management, and Biosphere 2 was labeled science fiction, instead of credible science.

Despite these tribulations, the biospherians completed their mission, coalescing to cooperatively manage their impact on a model environment. That is until their miniature world was taken over. This is an epic story, spanning half a century, about the forces that threaten our planet, but also the power of small groups to literally reimagine the world.