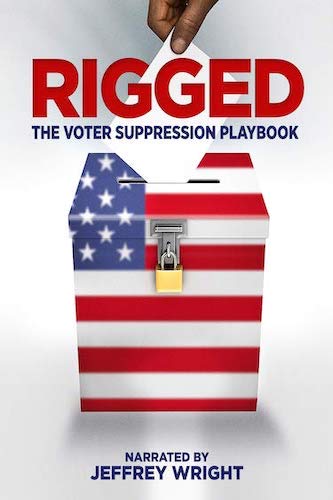 Free and open to the public! Attendees with RSVP tickets will be seated at 7pm; remaining seats will be released once RSVPs are seated.

What would happen if political operatives tried to subvert the sacred American principle of “one person, one vote?” What if they hatched and pursued that plan for years before anyone noticed what they were doing? That is the frightening tale told in a new feature documentary, Rigged: The Voter Suppression Playbook. Narrated by Jeffrey Wright, and shot during the chaotic 2016 election, the film identifies and unpacks a shrewd ten-part strategy developed by Republicans to suppress votes that would be cast against them.