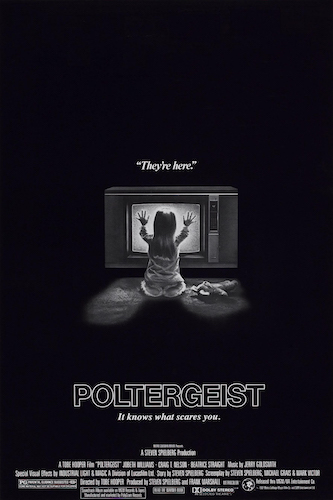 Join us as Haunted Knoxville Ghost Tours (in association with Paranormal Underground magazine) presents one of the 1980s’ most lasting and influential horror films.

These special event screenings will be accompanied by a talk from by HKGT’s resident paranormal historian J. Adam Smith; attendees will receive a limited-edition lanyard and are invited to attend in 80s film-themed costumes.

Sponsored by Paranormal Underground Magazine & Clowers ITC, these special event screenings will be accompanied by:

Informative Introduction: hear from paranormal historian J-Adam Smith and his Haunted Knoxville team on the background behind the film!

Exclusive Special Event Lanyards: Free to everyone who attends!

80s Costume Theme: Come dressed up as your favorite 80s entity (or rocking swag from previous Haunted Knoxville events) and be one of 20 attendees to get a special grab bag!

“Hooper and Spielberg hold our interest by observing the everyday rituals of this family so closely that, since the family seems real, the weird events take on a certain credibility by association.” – Roger Ebert

“A thoroughly enjoyable nightmare, one that you know that you can always wake up from, and one in which, at the end, no one has permanently been damaged. It’s also witty in a fashion that Alfred Hitchcock might have appreciated.” – Vincent Canby