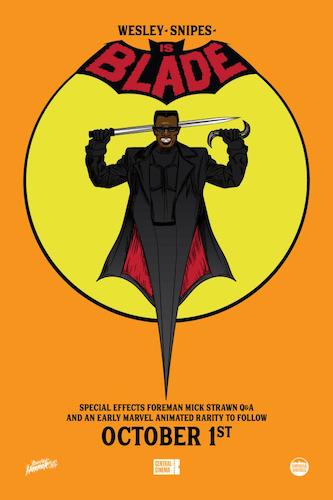 1998’s BLADE was just the second big-screen visit to the Marvel Comics universe (after 1986’s HOWARD THE DUCK), and one of only a handful to earn an R rating. Join us for our latest collaboration with Nirvana Comics as we revisit BLADE with special effects foreman Mick Strawn in attendance for a special Q&A… then stick around for a surprise second feature, an animated oddity tied closely to Blade’s comic book mythology.

When Blade’s mother was bitten by a vampire during pregnancy, she did not know that she gave her son a special gift while dying—all the good vampire attributes in combination with the best human skills. Blade (Wesley Snipes) and his mentor Whistler (Kris Kristofferson) battle an evil vampire rebel (Stephen Dorff) who plans to take over the outdated vampire council, capture Blade and resurrect a voracious blood god.