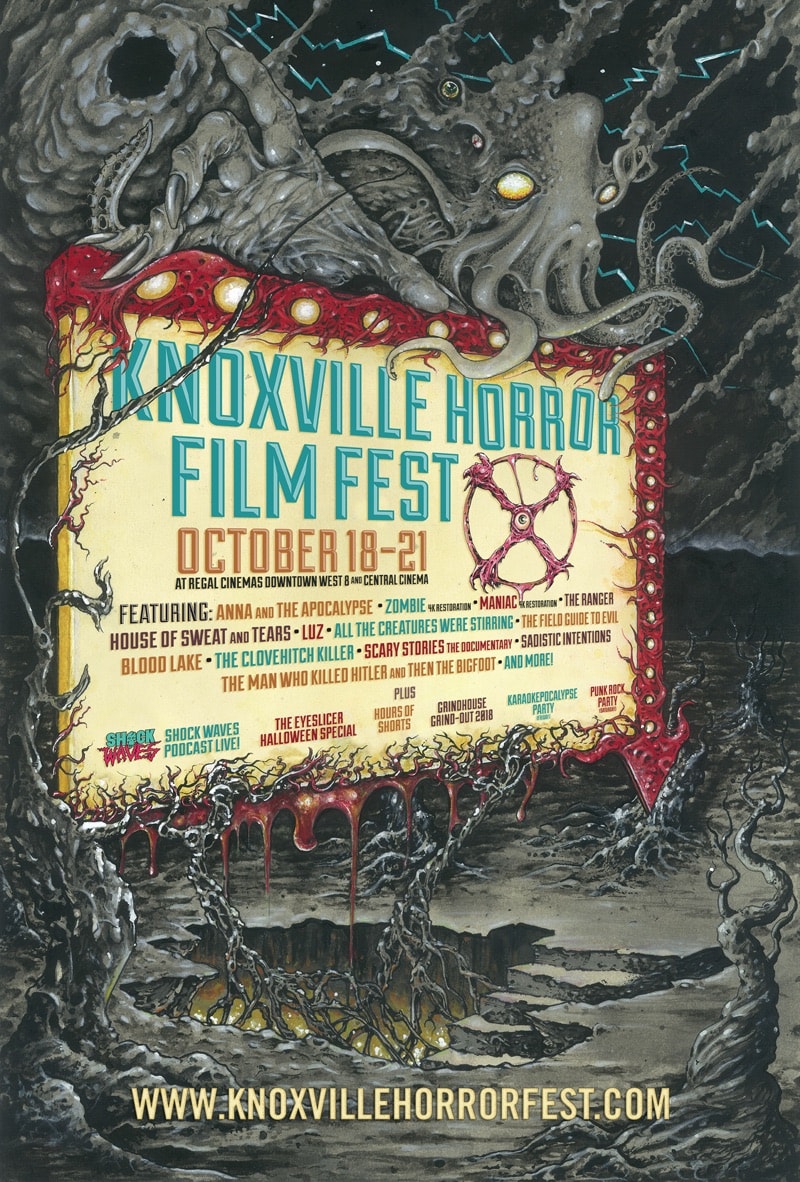 The tenth annual Knoxville Horror Film Fest runs October 18-21, 2018 at Central Cinema and Regal Downtown West 8!Between celebrating our tenth anniversary and opening our own theater, it was inevitable that this year would be our biggest ever… but we’ve still kind of outdone ourselves.

This year’s feature presentations include Anna and the Apocalypse, The Ranger, The Man Who Killed Hitler And Then The Bigfoot, Luz, the WORLD PREMIERE of Sadistic Intentions, The Field Guide to Evil, All The Creatures Were Stirring, House of Sweat and Tears, Scary Stories: A Documentary, The Clovehitch Killer. This year’s repertory programming includes 4K restorations of Zombie (1979), Maniac (1980) and the gloriously unrestored shot-on-video oddity Blood Lake (1987).

And as usual, there’s plenty of fun besides, including hours of startling short films from around the region and around the world, the locally-sourced schlock of the eighth annual KHFF Grindhouse Grind-Out filmmaking competition, The Eyeslicer Halloween Special (a touring shorts compilation featuring our unforgettable buddy Gwilliam), themed afterparties at Central Cinema Friday & Saturday night, and a visit from Shock Waves, who will present a live podcast and make time for some Dead Right Trivia!

As with most previous years, KHFF is formatted as a single extended program split across two different venues. (That is to say: don’t worry about overlaps or scheduling conflicts.)

Thursday evening, Friday afternoon and all of Sunday’s festivities will take place at KHFF’s home base Central Cinema (1205 N Central). Friday evening and all day Saturday we’ll move the fun to Regal Cinemas Downtown West 8 (1640 Downtown West Blvd) for our highest-profile screenings, including our repertory restorations and the Grindhouse Grind-out.

7pm – All The Creatures Were Stirring with short films Cut Off, My Monster and TerrorDactyl

1pm – The Clovehitch Killer with short film Riley Was Here

12pm – House of Sweat and Tears

7:15pm – Anna and the Apocalypse with short films Cabin Killer and The Bloody Ballad of Squirt Reynolds

1:45pm – The Man Who Killed Hitler and Then The Bigfoot with short film Latched

3:45pm – Survival of the Film Freaks with short films Blood Spook, 42 Counts and Don’t Eat at Dave’s (filmmakers in attendance for all films)

Due to Central Cinema’s limited capacity, our admission strategy will work a little differently this year.

Our FESTIVAL PASS, on sale now for $100, reserves you a seat at all KHFFX events across both venues. Since we only have about 80 to sell, that’s more or less the only guaranteed way to see ANY of the stuff at Central Cinema, including Sunday’s live Shock Waves podcast and a special surprise screening.

We’re also offering a $55 CENTERPIECE PASS, which gets you into all of Friday & Saturday’s screenings at Regal Cinemas Downtown West 8. Based on our tentative schedule, that’s seven feature films (including our pair of restored classics) plus a whole host of crowd-pleasing short films and the 2018 Grindhouse Grind-out! (Centerpiece passholders are also invited to join us for Central Cinema afterparties both nights.)

FRIDAY PASSES ($25) and SATURDAY PASSES ($35) will be available as well, along with advance tickets to Saturday night’s GRINDHOUSE GRIND-OUT ($15).

Advance passes, including a limited number of full festival passes, are available via FilmFreeway.

Individual admission to all other Downtown West 8 screenings will be available 30 minutes prior to showtime; we also hope to make a limited number of general admission tickets available to each block at Central Cinema.