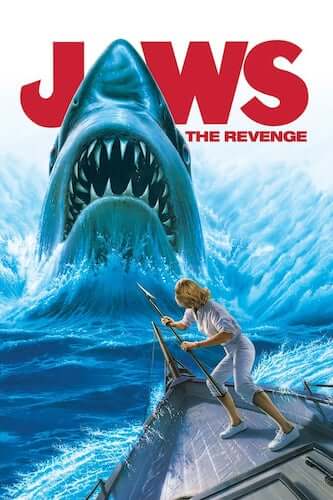 Our multiplex competitors are spotlighting the usual holiday classics this season, so we’re taking the opportunity for a detour through the outskirts of Christmas cinema. First up is the fourth and final film in the JAWS franchise, in which a great white shark embarks on a holiday revenge odyssey all the way from New England to the Bahamas.

The family of widow Ellen Brody (Lorraine Gary) has long been plagued by shark attacks, and this unfortunate association continues when her son is the victim of a massive great white. In mourning, Ellen goes to visit her other son, Michael (Lance Guest), in the Bahamas, where she meets the charming Hoagie Newcombe (Michael Caine). As Ellen and Hoagie begin a relationship, a huge shark appears off the coast of the island, and Ellen’s trouble with the great whites begins again.