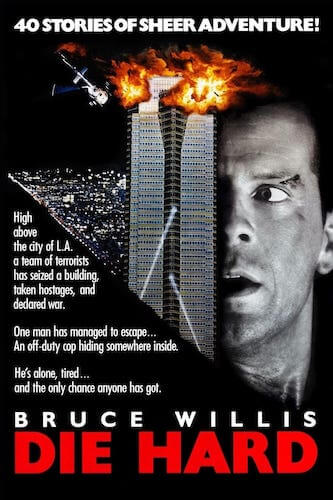 The debate over whether DIE HARD is or is not a “Christmas movie” doesn’t seem like it’ll ever die, but one thing is for sure: Bruce Willis’ starmaking action spectacle is the gift that keeps on giving.

New York City policeman John McClane (Bruce Willis) is visiting his estranged wife (Bonnie Bedelia) and two daughters on Christmas Eve. He joins her at a holiday party in the headquarters of the Japanese-owned business she works for. But the festivities are interrupted by a group of terrorists who take over the exclusive high-rise, and everyone in it. Very soon McClane realizes that there’s no one to save the hostages — but him.

“DIE HARD is an action picture with a capital A. In fact, you might as well go ahead and capitalize the whole darn word.” – Orlando Sentinel