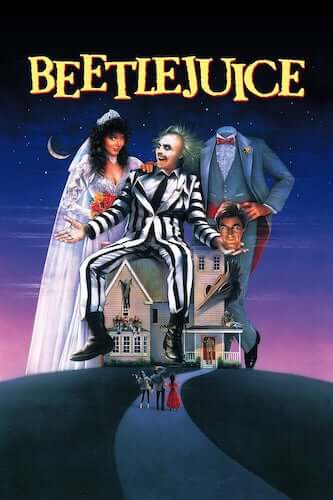 After Barbara (Geena Davis) and Adam Maitland (Alec Baldwin) die in a car accident, they find themselves stuck haunting their country residence, unable to leave the house. When the unbearable Deetzes (Catherine O’Hara, Jeffrey Jones) and teen daughter Lydia (Winona Ryder) buy the home, the Maitlands attempt to scare them away without success. Their efforts attract Beetlejuice (Michael Keaton), a rambunctious spirit whose “help” quickly becomes dangerous for the Maitlands and innocent Lydia.

Tim Burton’s second feature set the stage for a career full of grotesque comedic fantasias, and may be the best of them thanks to Michael Keaton’s revelatory performance as the ghost with the most.

“The joy of BEETLEJUICE is its completely bizarre — but perfectly realized — view of the world.” – Washington Post