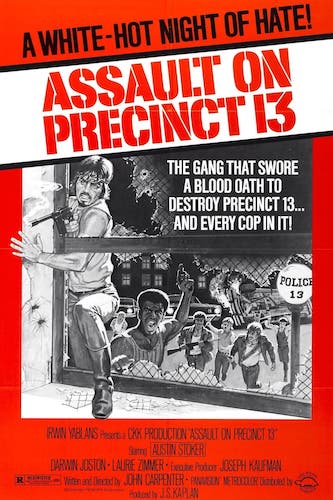 We hit as many John Carpenter classics as we could during our 2021 director’s series, but the man simply made too many great movies. But it’s a good thing we held off on ASSAULT ON PRECINCT 13: we’re now thrilled to present the brand new 4K restoration of Carpenter’s professional debut, which reimagines Howard Hawks’ RIO BRAVO (screening back to back with PRECINCT Saturday & Sunday) as a grimy, bracing urban seige thriller.

When the LAPD kills several members of the South Central gang Street Thunder, the remaining members avenge themselves by way of a bloody war waged against cops and citizens alike. Caught in the crossfire is Lt. Ethan Bishop (Austin Stoker), who’s managing a skeleton crew at the local and soon-to-be-closed police precinct. As the gang members close in, Bishop forms an unlikely alliance with a group of prisoners in order to defend the station and the lives of everyone in it.

“A joy to behold: a taut, aesthetic blast of violence.” – Empire Magazine