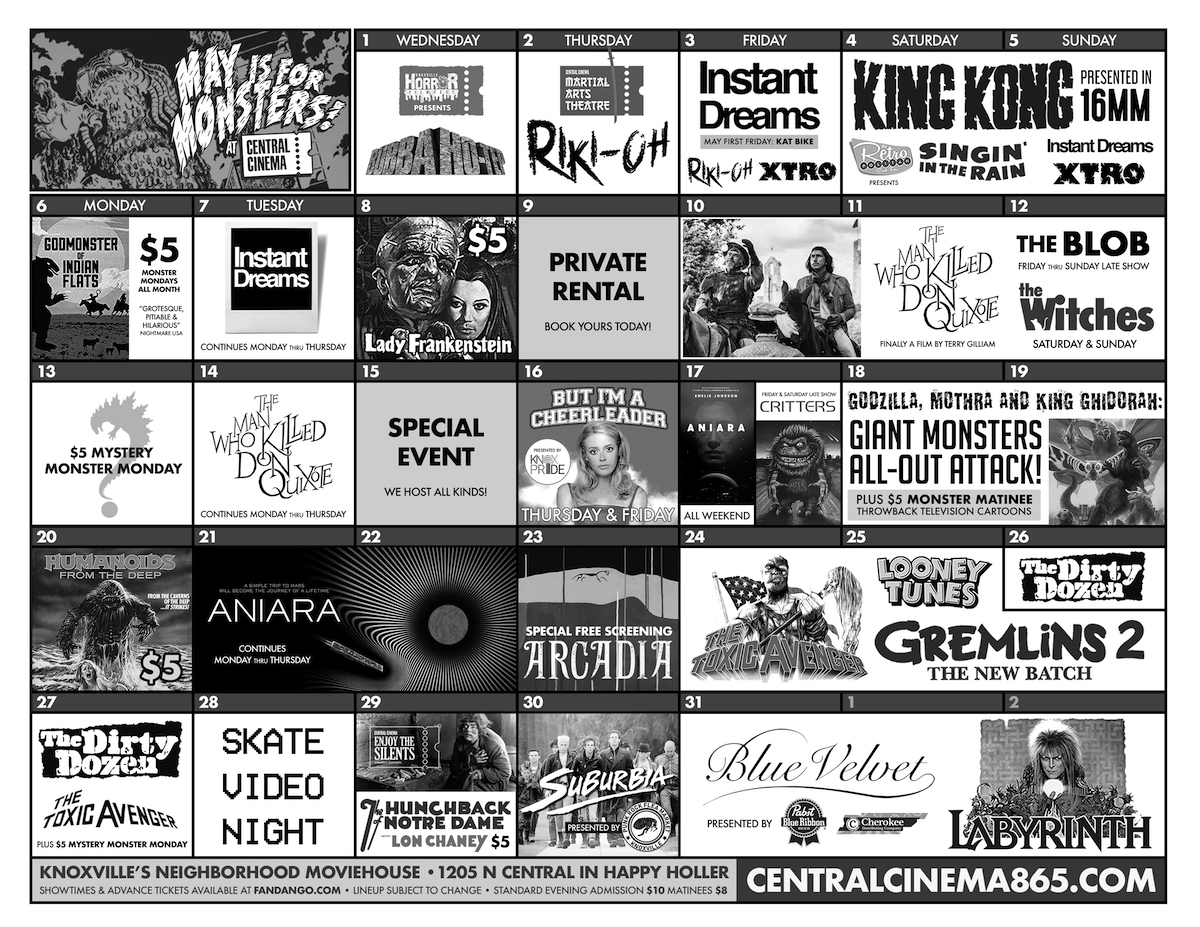 We’ve been having fun with some loose themes lately at Central Cinema… The Uninvited, Cat Video Fest, and Roar went pretty well together, not to mention the Frank / Donnie Darko “Masked Guys Named Frank” pairing.

But we’ve also had requests for more extended series a la “Noirvember” and January’s Stanley Kubrick celebration, so when the offhand idea “May Is For Monsters” came up we stopped everything else we were doing and shouted monster movies at each other for half an hour. We’ve been teasing this for a few weeks, but we’re happy to present the full-ish lineup for May 2019, along with a series pass that will get you into every single movie.

The megaseries officially kicks off May 4 &5 with two very special 16mm film screenings of Merian C. Cooper’s 1933 monsterpiece King Kong, presented as part of our “Film On Film” screening series in collaboration with Appalachian Media Archives. You won’t want to miss this chance to see the original monster classic projected just as it was on its release 86 years ago.

But even before Kong hits the screen, we’re starting a little early with another King: on May 1 Knoxville Horror Film Fest presents Don Coscarelli’s sleeper favorite Bubba Ho-Tep, which pits Elvis Presley (Bruce Campbell) and JFK (Ossie Davis) against a mummy terrorizing their shabby nursing home. And for two nights after that, our Martial Arts Theatre and Late Show series team up for the bonkers kung-fu cult favorite Riki-Oh: The Story Of Ricky (May 2-3).

We’ve also got some more family-oriented scares in the mix for weekend matinee screenings, starting with Roald Dahl’s The Witches (May 11-12), the obligatory Godzilla, Mothra & King Ghidorah: Giant Monsters All Out Attack! (May 18-19, paired with a monster cartoon matinee), Gremlins 2: The New Batch (May 24-26, paired with another round of Looney Tunes), and Jim Henson’s Labyrinth (May 31 – June 2).

And for the real heads out there, we’ll be setting aside Monday nights for $5 Monster Mondays, featuring deep cut curios The Godmonster of Indian Flats (May 6) and Humanoids From The Deep (May 20) plus two as-yet-unannounced mystery monsters. And we carry on the theme to two of our $5 monthly series as well: Tales From The Public Domain debuts with the 1971 Italian wonder Lady Frankenstein (May 8), and our Enjoy The Silents series showcases 1923’s The Hunchback of Notre Dame (May 29).

That’s a lot of monsters… and if you’re hoping to catch as many of them as you can, you’ll want to grab our Monster Mayhem Pass, a punch card that gets you into every May Is For Monsters! screening all month long. Just $70 for members and $85 for non-members, these passes will be available at Central Cinema beginning May 1. Whoever ends up seeing the most movies wins some monster prizes at the end of the month!

For our monster-averse viewers out there, don’t worry… that’s not all we’re up to in May. This month’s featured artist, instant photographer Kat Bike, will be displaying her work starting at our monthly First Friday Open House (5-7pm May 3), bookended by the first two screenings of the fascinating first-run documentary Instant Dreams (May 3-9). We’re bringing Terry Gilliam’s decades-in-the-making The Man Who Killed Don Quixote (May 10-16) to town for a full week-long run, followed by the acclaimed new sci-fi drama Aniara (May 17-23). On May 16 & 17 we’re teaming up with Knox Pride for the comedy favorite But I’m A Cheerleader. Our Skate Video Night series returns later in the month, along with a special FREE screening of the unique documentary art film Arcadia (May 23). And on Thursday, May 30 we’re teaming up with Punk Rock Flea Market Knoxville for a screening of Penelope Spheeris’ punk life classic Suburbia in preparation for this year’s event (June 1 at Hexagon Brewing.)

See you amidst the rubble,